March 2016
Rotary  Amble and Warkworth presents a cheque for £800 to the Amble Shannon Lifeboat Appeal.  The cheque was presented by Rotary President, Dave Shoemaker.  Pictured (LtoR) are John Connell ( Coxswain), Dave Shoemaker and Mike Frisch (Chairman of Rotary's Community Service Committee) with members of the crew in the background.  The money was raised by the Club during the annual Christmas Collection in Amble, Warkworth and surrounding village

October 15, 2016
Concert by the Band of the Royal Regiment of Fusiliers
At JCSCollege, Acklington Road, Amble. 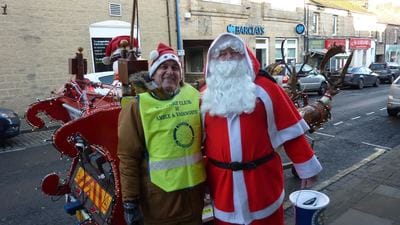 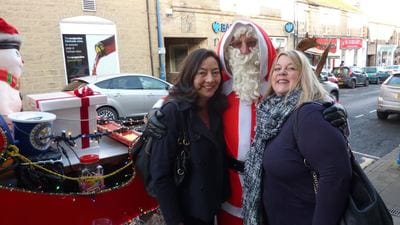 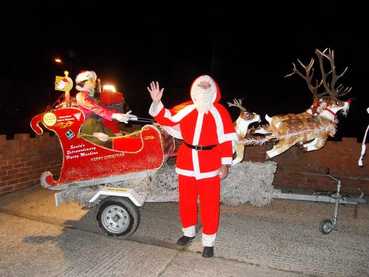 Record Collection in 2016
£6,103.25p was the total of Street and House-to-House collections this Christmas by Volunteers from Rotary, Inner Wheel, JCSCollege Interact and two Rotary-led Community Groups.

The Sleigh in Amble December 2016 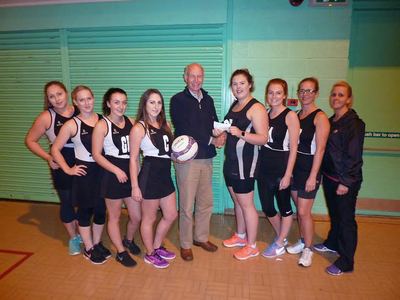 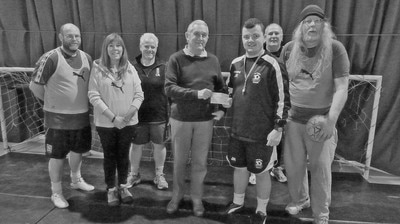 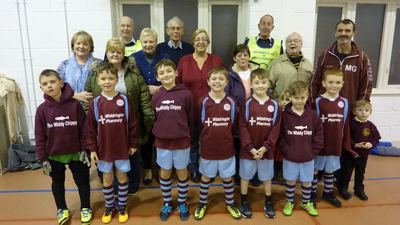 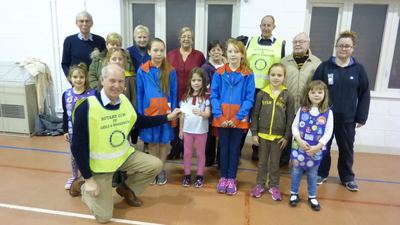 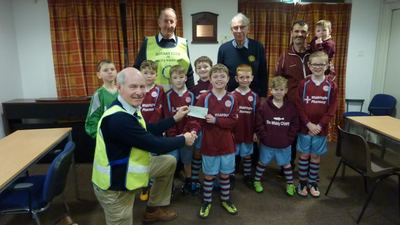 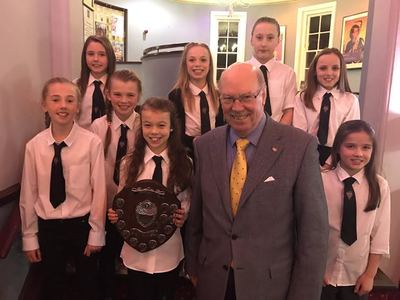 ROTARY AMBLE & WARKWORTH LEND A HAND AT THE PUFFIN FESTIVAL 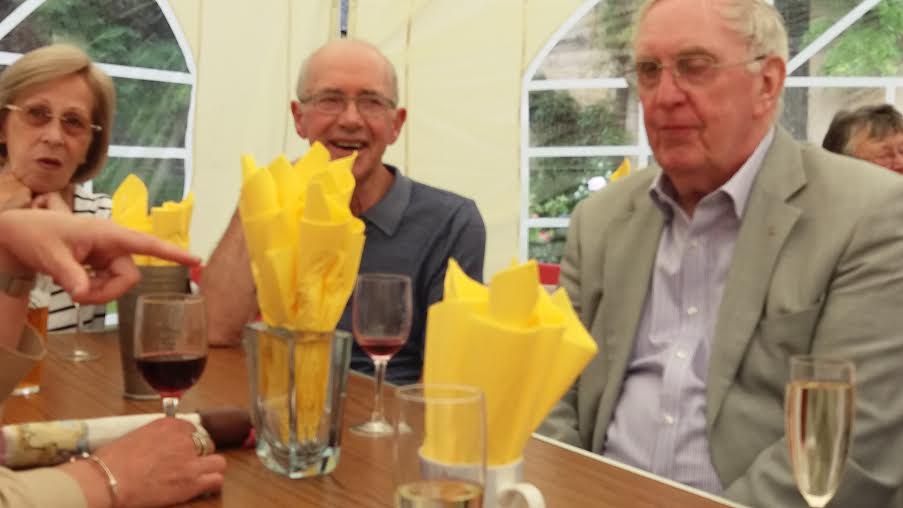 SUMMER GARDEN PARTY - July 30th, 2016
A Rotary Summer Evening Party held on Saturday 30th July raised £900 for local charities.  Hosted by Professor Werner Dobrowsky and Dr. Eva Dobrowsky at their historic home in Warkworth, guests were treated to a buffet and drinks, with the Rotary tent saving most from getting too wet during the inevitable summer downpour.
Local businesses generously supported the event:Other raffle prize donations from Inner Wheel members enabled the raffle to raise £297.
Fundraising Committee chairman, Derek Conway said, “The event was a great success and everyone enjoyed the evening but more importantly £900 was raised with no costs at all, so every penny can be donated to the local charities supported by the Rotary Club of Amble & Warkworth. Werner & Eva Dobrowsky have such an amazing house in Warkworth, it was typically generous of them to make everyone very welcome.  The Rotary Club team worked hard setting everything up and take great delight in the support the Club is able to provide for local charities”. 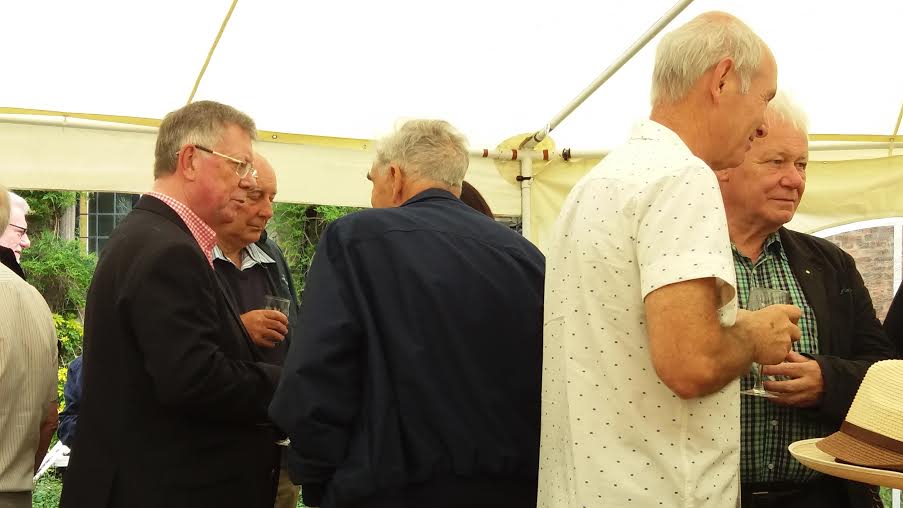 CLUB HONOURS MEMBER FOR SERVICE ABOVE AND BEYOND.....!

Rotarian Mike Frisch from Warkworth (aka Santa Claus) was recently presented with a Paul Harris Fellowship by the Rotary Club's President, Dave Shoemaker.  The award is for Mike's excellent and dedicated service to Rotary and to the community.  He has been Amble and Warkworth's Santa Claus at the annual Christmas collection for the last 20 years and has helped to raise in excess of  £85,000 pounds for local good causes and charities.    Mike's loyal service was outlined by Rotarian Dr Paul Creighton who described him as a true Rotarian who is always willing to help with any of Rotary's projects, whether it be litter-picking, fence painting or any other task.  The Paul Harris Fellowship is Rotary's highest award and is named after the organisation's founder. " 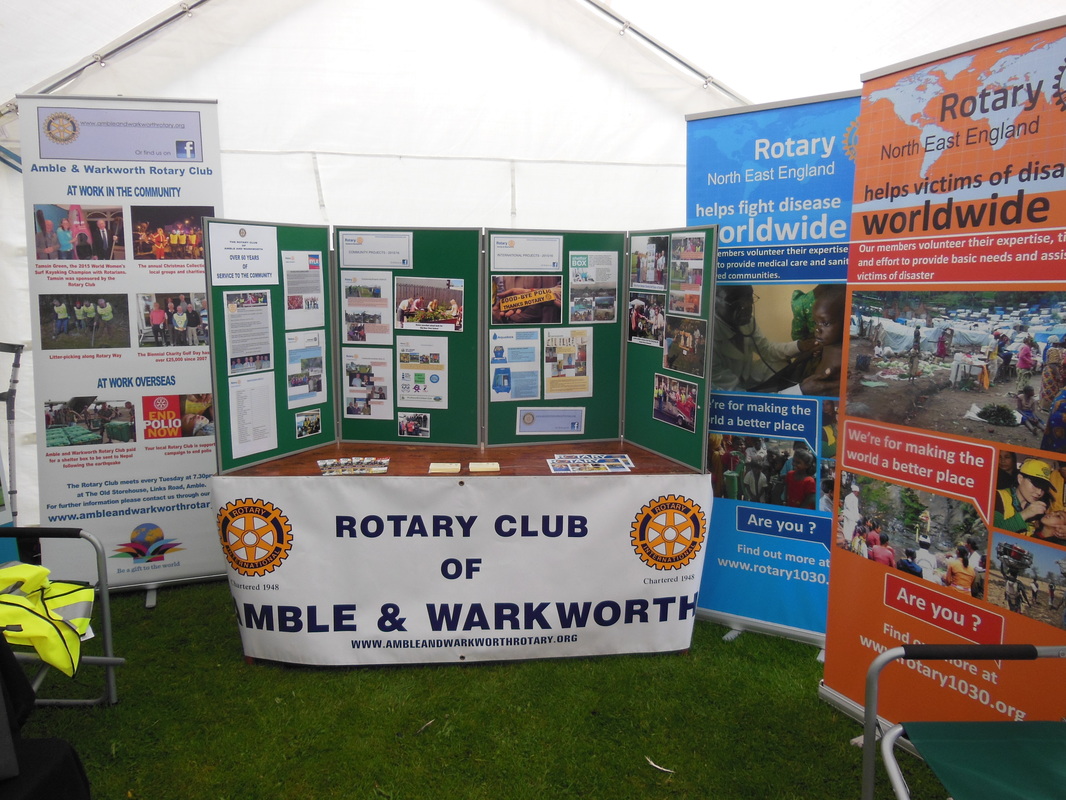 ROTARY AMBLE AND WARKWORTH SLEIGH CHRISTMAS 2015
Members of Rotary Amble and Warkworth would like to extend their grateful thanks to the residents of Amble, Warkworth, Red Row, Hadston, Broomhill, Togston and Acklington for generously supporting our annual Christmas Collection.

We raised the magnificent sum of £5,267 which, over the next few weeks, will be distributed to a number of local good causes and charities including : RNLI Amble, North Northumberland Hospice, Daft as a Brush Cancer Patient Care,Tiny Woods Football Academy Amble and Brambles Childcare Centre Amble. 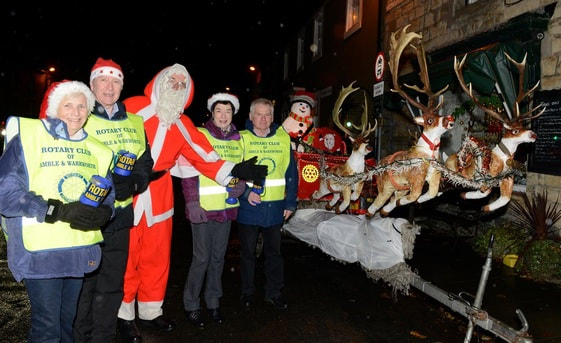 President David Shoemaker is pictured presening a cheque for £300 to Brambles Child Care Centre in Amble.
Dave said: "I was most impressed with the facilities provided by this excellent, not-for-profit community organisation which provides a much needed service for children in our community.  Rotary had no hesitation in agreeing this donation from the proceeds of our annual Christmas collection."
Pictured (L to R): Ailsa Dellbridge, Dave Shoemaker, Stephanie and her son Dexter (Bramble Berries Friday afternoon drop in for parents and babies up to 18 months), Nicky Gemmell, Adele Younge and Pauline Donoghue (Centre Manager).  In the front are 5-year old Bonnie amd 6-year old Lucy. 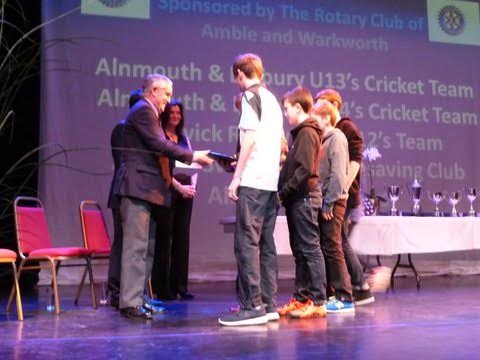 President Dave Shoemaker presents the Club's award for the best Under-12 Sports Team at the Alnwick and District Sports Awards. The best team this year were judged to be Alnmouth and Lesbury cricket team. 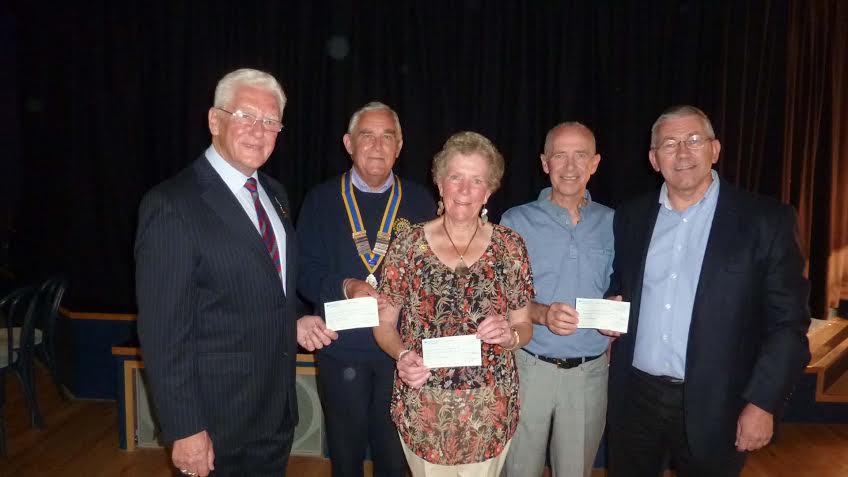 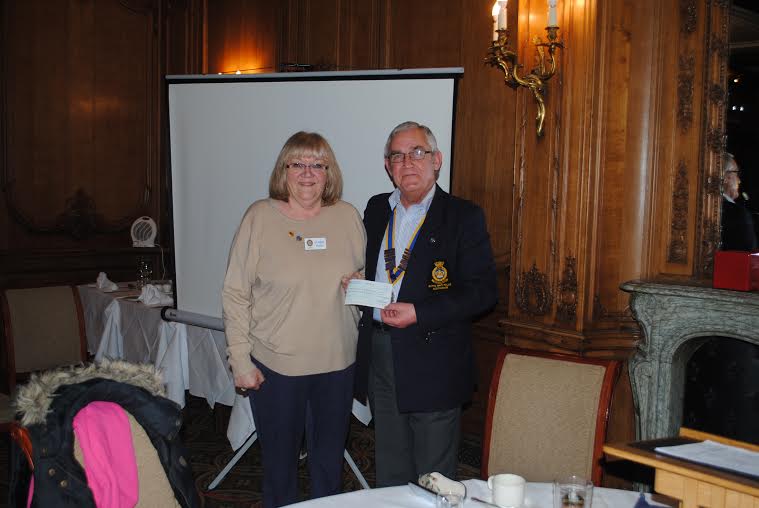 3 March, 2016
President Dave Shoemaker presents Rotary Amble and Warkworth's  contribution to the District-wide initiative to support the Kandy Centre for Handicapped.  The District Youth Chair Elaine accepted the cheques after giving a presentation on the project to Alnwick club members and Rotary Amble & Warkworth, including President Dave Shoemaker and two representatives from the Interact Club.

For further details about the project go to International Action. 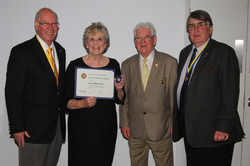 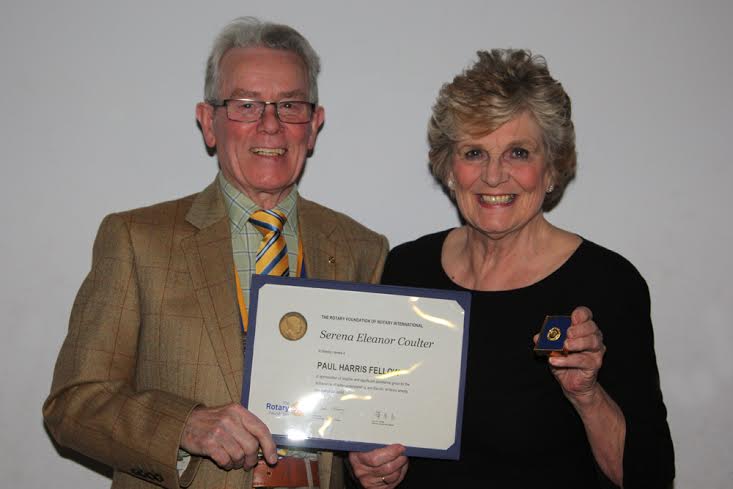 Rotary Amble and Warkworth Honour Serena Coulter for many years of voluntary work in the community.

This will be only the second occasion when such an award has been made by our club to a non-rotarian. Last year we made the first such award to Audrey Jones from Amble.

Serena has been active in Warkworth in many spheres, Former President of the WI, Former Parish Councillor, Former Chair of the Memorial Hall Trustees, and very active on the Warkworth in Bloom committee for a number of years. 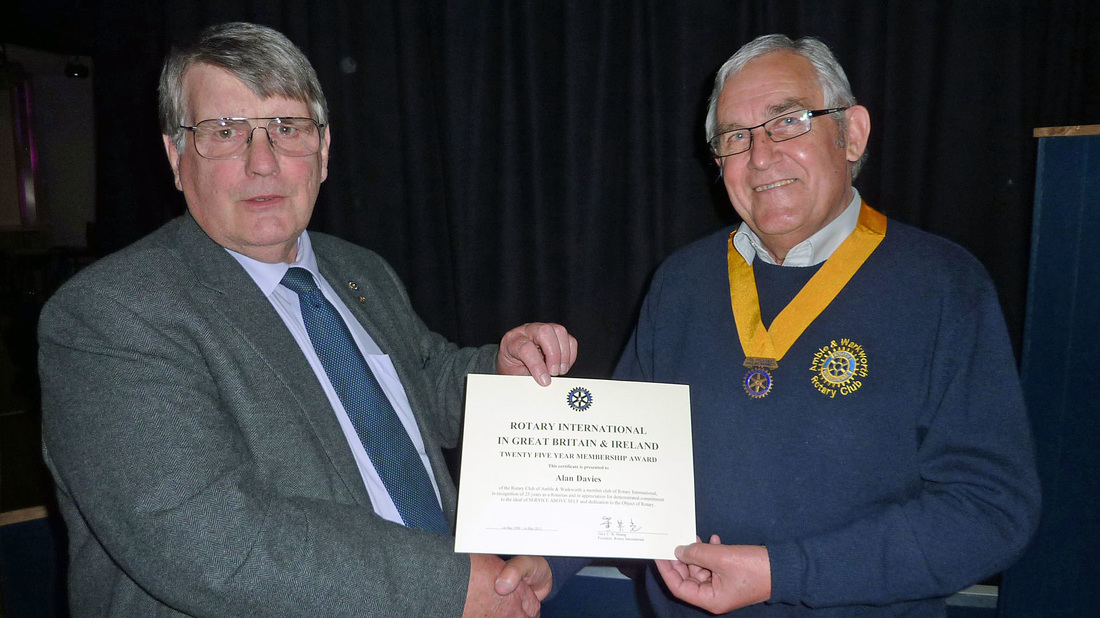 He recently arrived at his new club on a free transfer after 25 years with West Midlands club, Rotary Darlaston. 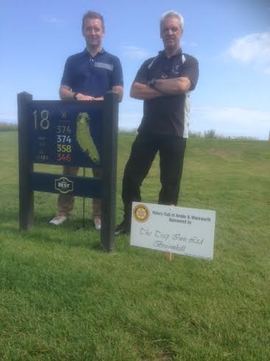 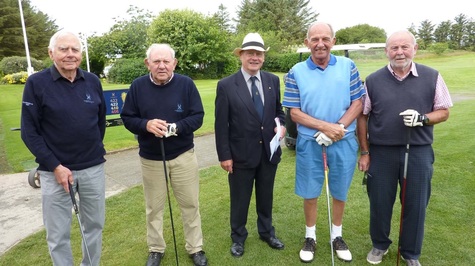 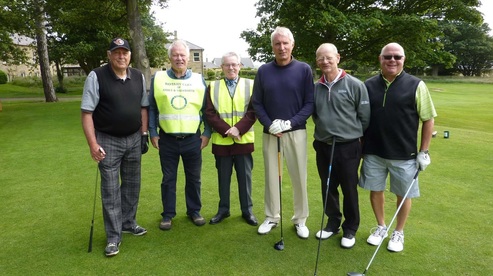 SSAFA will also be beneficiaries from the day.